If you are experiencing a dull ache in your outer elbow, or gasp in pain upon bumping your elbow on anything, you may be suffering from tennis elbow. There are four types of operations that are typically used to treat tennis elbow, but only one that Dr. Ichtertz recommends; percutaneous lateral elbow tenotomy. There are many other surgeons that are recommending more expensive techniques that are not as beneficial, and may even be detremental to your outcome, leaving significant scarring.

At Nebraska Hand & Shoulder, our goal is to treat your condition to provide the best outcome with minimal down time. We have performed over 250 procedures for tennis elbow and our recent research indicates that overwhelmingly, our patients have experienced excellent results. Our patients are able to more quickly return to work and their daily life. Additionally, this particular surgery leaves far less scarring. Schedule your appointment today and experience the most advanced surgical solutions available for tennis elbow.

Tennis elbow or, more appropriately, lateral elbow epicondylalgia is a very common problem in adults over the age of 30. The onset is usually slow and subtle without a clear identifying event to precipitate the onset. Once it develops it doesn't let you forget! It seems that at every turn you bang it into something.

Usually there is exquisite point tenderness at the most prominent point on the outer elbow. There is frequently pain in the form of a dull ache over a larger area of the outer elbow sometimes radiating all the way to the top of the wrist with lifting. Pain may also radiate up to the shoulder. The person may have perceived pain from wrist to shoulder. Bump the elbow and you'll know it! Grasping objects results in increased pain especially if the elbow is straight when reaching and the palm is facing downwards. It stands to reason that symptoms are lessoned by avoidance of palm down grasp and restricting oneself to grasping objects only a short distance away to avoid elbow extension.

Normally the patient complains of tenderness upon squeezing the epicondyle and the extensor muscle just towards the hand. There is rarely any significant tenderness over the posterior interosseous nerve in the radial tunnel. Absence of pain in the outer elbow upon resisting turning the forearm palm upwards with elbow extended or flexed helps to rule out radial tunnel syndrome-a rare diagnosis of exclusion. X-ray is usually normal and CAT scan and MRI are not indicated. Unfortunately the controversial questionable diagnosis of "fibromyalgia" lists outer elbow tenderness as one of its cardinal sites! This often delays correct treatment. 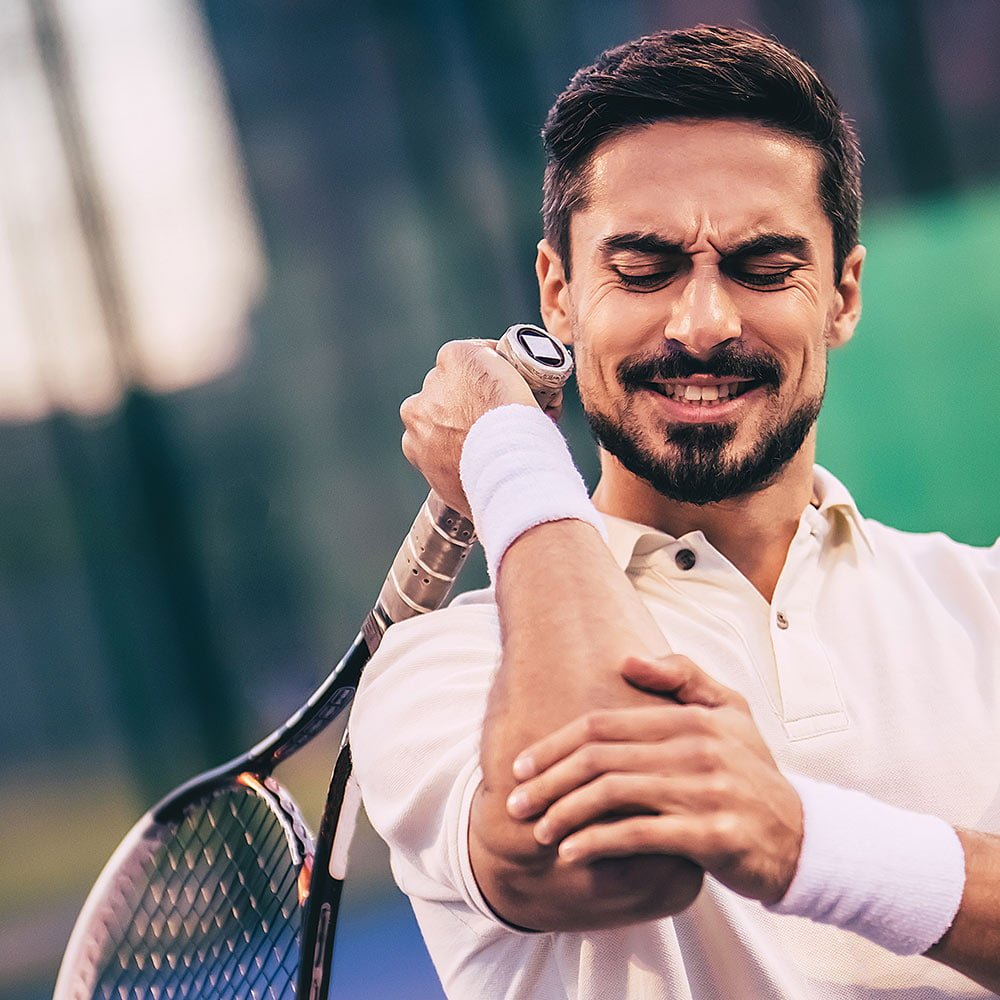 Age related extensor tendon degeneration is the most obvious contributing factor. Some element of "over use" is frequently, but by no means always, identified. In fact, a lot of patients are retirees or couch potatoes involving their non-dominant arm. Evaluation of surgical tissue specimens from involved elbows has proven that there is almost never any inflammation but rather, evidence of degenerating tissue. Thus calling this problem an "itis" which means inflammation is clearly incorrect. Epicondylalgia or pain in the epicondylar area of the elbow is the correct term.

Since this problem usually occurs in the same individual who has, or has been treated for, carpal or cubital tunnel syndrome, they are often unaware of it. This is because the outer elbow is innervated by the radial nerve rather than the median nerve involved in carpal tunnel or the ulnar nerve involved in cubital tunnel. There may also be some element of a “peripheral neuropathy” to account for it.

Comorbidities (Other conditions occurring at the same time)

This problem usually occurs in the same person who has been treated for, or who has, carpal and or cubital tunnel syndrome. There is a suggestion that abnormal function of the radial nerve innervating the outer elbow has a lot to do with the onset of symptoms, suggesting some sort of a peripheral neuropathy. In fact at least two prominent surgeons, Emmanuel Kaplan in the 1950's and Wittenberg in the 1980's and Dellon in the 2000's have promulgated denervation of the outer elbow as a solution. This has led to a solution providing the least invasive, fastest recovery, and lowest cost.

Nonoperative: It's not unusual for the elbow to hurt for months while slowly improving or becoming better tolerated. There is no general agreement on the best treatment. Though physical therapists think they can help, I've not seen a case yet where PT has had lasting benefit. After all, increased activity is what most patients claim aggravates the symptoms. There is no scientific reason why cortisone injection should help this condition but it frequently gives weeks to months, if not permanent, relief. Aside from one or two days of increased pain that often follow injection, there is minimal risk of any side affect. A snug wrap or tennis elbow band or strap gives some relief but has no affect on actually solving the problem.

There are three operative choices to consider but only on logical one:

The best track record of the three contemporary options is unquestionably held by the tenotomy. Specifically reported on in a large series in 1980 from a surgeon tending a tennis club and subsequently by numerous others (request a brochure with references). It costs less, leaves no visible scar, does not require time off of work, and has minimal risk. It takes 3 to 4 months for a person to reach maximal medical improvement or MMI.

The other three choices are much more expensive and more risky; especially the elbow arthroscopy with three potential nerves to injure (ulnar, radial and median). Recovery from these other options is also much more prolonged requiring weeks rather than hours to days. The Nirschl procedure also leaves a sizeable scar, not something a young woman wants to sport any more than an active self-conscious man in his prime.

Results will depend upon patient selection by age, occupation, habits (such as smoking which may prevent healing), side involved and handedness, as well as, the surgeon's skill in supervising non-operative care and applying the operative technique. For the percutaneous tenotomy, the good to excellent outcomes can be expected between 80-90% (8 to 9 out of 10 cases). According to the largest reported series by Buford et al 70% are pain free by 3 months with another 20% taking a few more months to reach MMI. In the case of workers comp, patients return to work with minor restrictions in most cases immediately.

Elbow arthroscopy to trim away decayed tissue from the inside known as the arthroscopic ECRB (extensor carpi radialis brevis) debridement is very expensive and puts three nerves at risk of injury and, in my opinion, has a poor track record as has been pointed out by Mark Cohen, a highly respected orthopedist at Rush Medical Center in Chicago, citing four studies. There are about 40% of people treated in this fashion that continue to have pain in their elbow and, as was pointed out by Yoon, et al., in July 2015 Arthroscopy, Volume 31, there is still a substantial percentage treated this way that are frankly dissatisfied, i.e. poor outcome. In Yoon’s study 18% or 8 of 45 patients were dissatisfied.

A formal open lateral epicondylectomy is disfiguring, painful and requires a lot of immobilization. Though the results for achieving the pain relief are ultimately about as good as percutaneous tenotomy, the road to getting there is much rougher and leaves obvious scars. The reqired time off from work also elevates the cost substantially, making it is a much less convenient, and potentially disfiguring, treatment.

Workers comp patients in my practice recover more slowly but ultimately do quite well; it's just harder to get the average person blaming his job for a problem and at odds with his employer to concede recovery. This is especially true if the injured worker has no job to go back to or hates the position. Self abuse with smoking and/or heavy alcohol consumption can also not be expected to benefit healing.